The SAS in Action 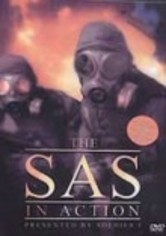 The SAS in Action

2004 NR 1h 30m DVD
Best-selling author Soldier 1 (known to his British anti-terrorism colleagues as "Snapper") reminisces about the special operations in which he took part during his 18 years of service. Along with operation footage from the Falklands, the Peterhead Prison rescue, Bosnia, Northern Ireland, Columbia, Borneo, Mirbat, Malaya, Libyan Embassy, Iraq and Jebel Akhdar, the program also includes interviews with veterans of other SAS campaigns.