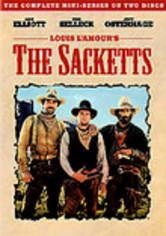 1979 NR 2 discs
Based on two Louis L'Amour novels, this epic saga follows the adventures of the Sacketts -- Tell (Sam Elliott), Orrin (Tom Selleck) and Ty (Jeff Osterhage) -- Tennessee brothers who head out West after the end of the Civil War. Tell leaves first, making his way by hunting and prospecting. After his younger brothers are almost caught in a local feud, they follow in Tell's footsteps, first herding cattle, then aiding in a Santa Fe racial dispute.