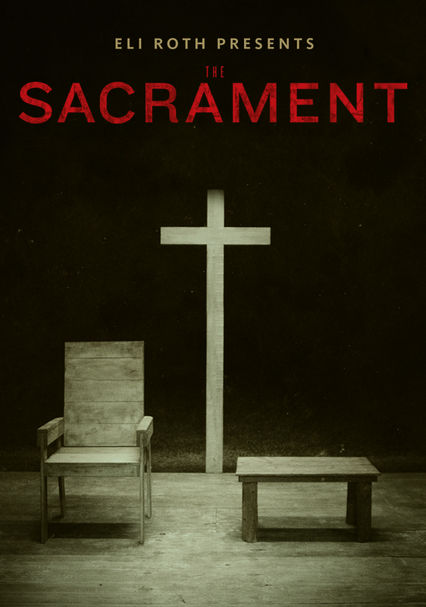 2014 R 1h 35m Blu-ray / DVD
Using "found footage," this unnerving thriller recounts the tragic story of an exiled Christian cult and the grisly events that transpire after three journalists -- one looking for his missing sister -- arrive at the commune.

Parents need to know that The Sacrament is a found-footage thriller with horror overtones from cult horror director Ti West (The House of the Devil, The Innkeepers). Many horror fans will want to see it based on his name alone. Dozens of characters are shown dying from poison or shootings. There's some blood; necks are sliced, and a character commits suicide by shooting his head off. A woman catches on fire, and children and babies are given poison. Language-wise, "f--k" and "s--t" are heard several times. A character snorts cocaine, and though it's mostly off screen, it's clear what he's doing. Many characters are referred to as recovering alcoholics or drug addicts. In one scene, it's suggested that a male character is having a threesome with two women, though nothing is shown. The movie has a fair bit in common with the real-life 1978 Jonestown Massacre, and parents may want to educate older teens about this incident in relation to the movie.

Guns are introduced early, and characters are shot and killed later in the film. Some blood is shown. Dozens of people die from drinking poison. Children and babies are given poison. A sister injects her brother with it. Anyone who doesn't die from the poison is shot. A woman's throat is sliced. A woman catches on fire. A man commits suicide by shooting his head off.

The movie has some interesting ideas about people working together and helping one another. It suggests that humans can live just fine without technology in the right circumstances.

A man briefly snorts cocaine, mostly off screen. Many characters are described as "drug addicts and alcoholics," though all are recovered and aren't shown using.