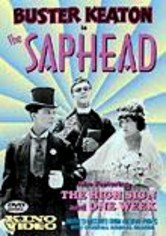 1920 NR 1h 58m DVD
Buster Keaton makes his feature-film debut in this silent film as Bertie Van Alstyne, the mollycoddled son of Wall Street tycoon Nicholas Van Alstyne (William H. Crane). Dad wants his young son to amount to something, so he gives him $100,000 to try his hand at the stock market. The befuddled Bertie buys into what appears to be a worthless stock -- but it turns out he's the one with the head for business!