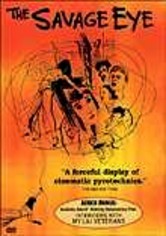 1960 NR 1h 28m DVD
After her divorce, Judith (Barbara Baxley) moves to 1950s Los Angeles to make a fresh start. As she wanders through the gritty streets of the city, she struggles to claim her new life. This award-winning documentary-style drama from Ben Maddow, Sidney Meyers and Joseph Strick also features Gary Merrill. The video also includes an Oscar-winning documentary chronicling the harrowing tales of those who survived the My Lai massacre of 1968.