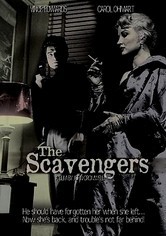 1959 NR 1h 19m DVD
Stuart (Vince Edwards) has nothing else going on besides his work as a seedy smuggler living in Asia in this 1959 thriller. His wife's been missing for far too long, and life is one big grind. But just as he's about to ditch his dead-end career, he happens to glimpse his wife -- or someone who looks very much like her -- on a boat in Hong Kong, and his ensuing search plunges him deeper into a life from which he wants out.