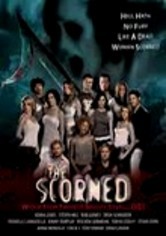 2006 NR 1h 27m DVD
Some of the most notorious reality television stars extend their 15 minutes of fame in this campy made-for-television thriller, chronicling the fallout of a man's decision to have an affair with his fiancée's best friend. An ensemble cast of "non-actors" includes Trishelle Cannatella and Steven Hill of "The Real World," Bob Guiney and Trish Schneider of "The Bachelor," and Jenna Lewis, Ethan Zohn and Jonny Fairplay of "Survivor."