The Search for the Atocha 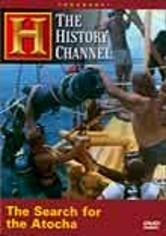 The Search for the Atocha

2005 NR 0h 50m DVD
While most of us are happy to find a forgotten $20 bill in an old pair of jeans, treasure hunter Mel Fisher can boast of a much bigger discovery. After years of research, he unearthed the lost vessel &NFiAtocha&NFi_; -- a Spanish galleon that sank off the Florida coast in 1622 laden with more than $400 million in gold -- and, better yet, captured its recovery on film. This A&E program presents Fisher's fascinating footage and recounts the ship's demise.