The Second Coming of Suzanne 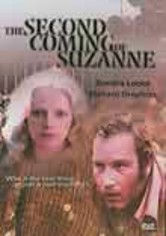 The Second Coming of Suzanne

1974 R 1h 30m DVD
Richard Dreyfuss stars as Clavius, a frustrated director whose longtime dream is to make a movie portraying Christ as a woman. And he doesn't just mean metaphorically. Suzanne (Sondra Locke), the young starlet he casts to play the prophet, finds herself mesmerized by the charismatic filmmaker but soon realizes she may be in over her head when she learns that he wants the crucial crucifixion scene to be very, very realistic.