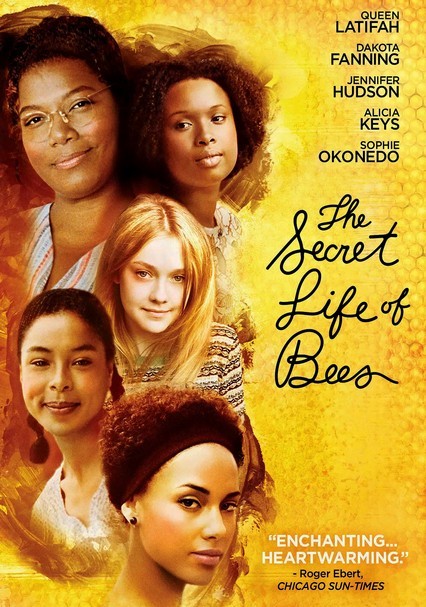 2008 PG-13 1h 49m Blu-ray / DVD
Haunted by her mother's death, 14-year-old Lily Owens (Dakota Fanning) escapes her dreary life on her father's farm and heads to Tiburon, S.C., with friend and caregiver Rosaleen Daise (Jennifer Hudson), spawning a life-changing journey of self-discovery. Set amid the hotbed of racial tensions in the 1960s South, writer-director Gina Prince-Bythewood's touching drama is based on Sue Monk Kidd's best-selling novel of the same name.

Parents need to know that this emotional, 1960s-set drama includes multiple scenes of a man reacting violently toward his wife and daughter. The child witnesses her father's assault on her mother (resulting in off-camera gunshots and death); as a young teen, the same child is the victim of heartless physical and mental punishment. The unexpected discovery of a beloved character's dead body is intense and may be disturbing to some young viewers. African-American characters suffer at the hands of prejudiced white Southerners in many scenes. Racial hatred is illustrated by ugly name-calling (including use of the "N" word) and two beatings. But in spite of all of the above, the filmmakers don't exploit or maximize the action. They show only as much as necessary to provide the desired impact.

An abusive husband assaults his wife (repeated in flashback), forcefully slaps a teen, and is menacing and threatening in many scenes. Gunshots are fired, resulting in an off-camera death. Racial intimidation results in severe physical beatings of two African-American characters. A dead body is revealed in an intensely emotional scene.

The ugly nature of racial prejudice is depicted several times. Some white residents of "The South" in 1964 are shown to be inhumane and brutal, their actions based on ignorance and irrational fear. A violent, cruel husband/father ultimately pays the price for his behavior.

A father drinks beer in one scene, whiskey in another.