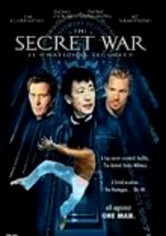 2007 PG-13 1h 20m DVD
More danger awaits New York City cop Jack (played by Dong Jin Kim) after he's nearly killed in the line of duty in this martial arts actioner with a sci-fi twist. To save Jack's life, his brother -- a Pentagon staffer -- pilfers an experimental microchip designed to create the ultimate warrior and embeds it in Jack. Next thing you know, everybody wants the supercop, including the FBI and … a hired assassin.