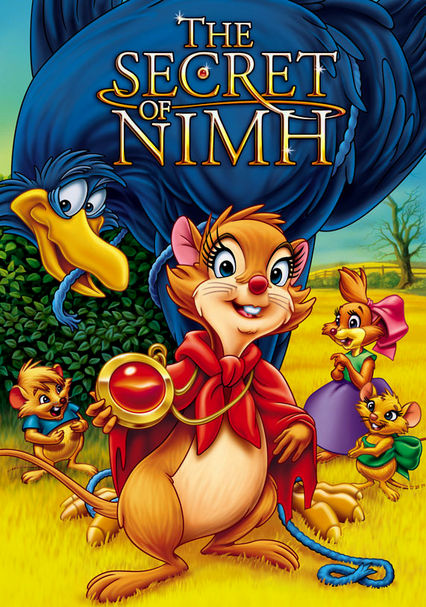 1982 G 1h 23m DVD
This animated adventure chronicles the trials of a widowed field mouse who must move her family to escape a farmer's plow. Aided by a crow and a pack of escaped lab rats, the brave mother struggles to transplant her home to firmer ground.

Parents need to know that this animated movie about a group of intelligent rats who escape from an animal laboratory is suspenseful and rather dark. Several scenes include animal children in peril and a sword fight between rats ends in one death with a little blood. The worst part for sensitive viewers: a flashback shows the animated animals being imprisoned and injected with a needle.

The crow talkes about "looking for a lady" and "making a love nest." Some flirtation between a male and female crow.

Lots of creepy, dark imagery, only occasionally lightened with humor. A scary and dramatic sword fight between rats with a little blood that results in the death of one rat. Two bad rats plot to kill a main character and make it look like an accident; they are successful. Mrs. Brisby's children are in great peril and almost drown in the mud. Rats, as well as dogs, cats, and monkeys, are subjected to scientific experiments including a scene of an injection in a flashback. A big spider crawls toward Mrs. Brisby before it's crushed by a giant owl. Characters eyes glow and might appear scary to some.

Includes themes of animal cruelty and animal experimentation, but also teamwork and freedom.

The rats drug the cat on occasion to make it sleep.