The Secrets of Genghis Khan 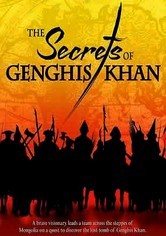 The Secrets of Genghis Khan

2003 NR 1h 31m DVD
Legend holds that Genghis Khan was buried with untold wealth: gold and silver, priceless art and other plundered treasure. Follow historian Maury Kravitz and a team of archaeologists on a perilous journey to find Khan's final resting place. Narrowly avoiding deadly vipers, an outbreak of anthrax and political double-dealing on their quest through Mongolia, the group digs up a fascinating and controversial find.