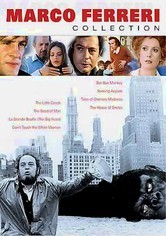 1969 NR 1h 53m DVD
In the wake of a widespread plague that devastates the Earth and erases most of the planet's population, two young survivors (Marco Margine and Anne Wiazemsky) can't decide whether it's a good idea to bring a new life into the world. The urge to spread mankind's seed seems natural, but is it the right thing to do? Italian film director Marco Ferreri helms this foreign-language classic with a science-fiction twist.