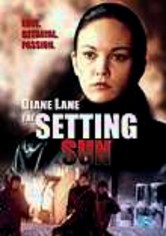 1992 NR 1h 53m DVD
As a secret agent for the Japanese Imperial Army, Tatsuma Kaya (Masaya Kato) must collect money to fund Japan's invasion of Manchuria. This leads him to rob a Chinese bank and, later, push overpriced salt along the countryside. When former flame Renko (Diane Lane) reappears in Kaya's life, he's forced to sell opium after his bosses threaten her, which ignites a confrontation with a merciless gang boss (Yuen Biao). Donald Sutherland co-stars.