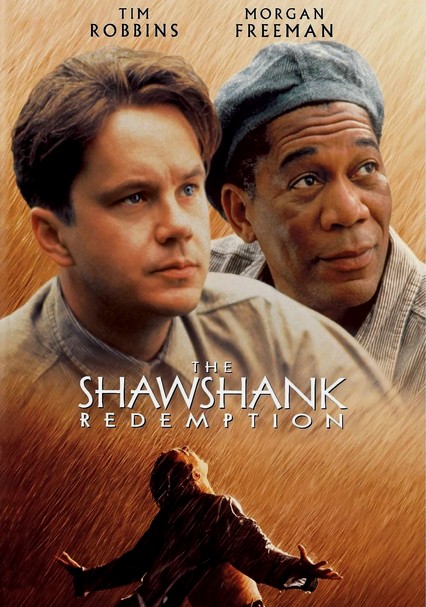 1994 R 2h 22m Blu-ray / DVD
Framed for murder, upstanding banker Andy Dufresne begins a new life at Shawshank prison, where he comes to be admired by the other inmates -- including an older prisoner named Red -- for his integrity and unquenchable sense of hope.

Parents need to know that The Shawshank Redemption is an Oscar-nominated 1994 movie based on a Stephen King story about a man sent to a maximum security prison in Maine in the 1950s who shows the other inmates perseverance and provides a sense of hope and optimism in the bleakest of places and under the most difficult of circumstances. The gritty world of Shawshank Prison is populated with sadistic guards, a corrupt warden, and predatory fellow inmates. Prison rape, while not graphically shown, is very strongly implied, with references and body positions suggesting forced anal and oral sex. Guards beat and kill an inmate. A prisoner is shot and killed by a man with a rifle. There is also a scene in which a character crawls through 500 yards of a sewer pipe filled with excrement. There is also frequent profanity, including "f--k" and its variations. However, the film also shows inmates forming a loving community of friendship and support despite oppressive conditions and a sense of maintaining perseverance and hope in the darkest of hours.

Sex is portrayed obliquely at the beginning. Lots of cheesecake photos of sex symbols from the 1950s and '60s decorate the prison walls.

Hope, endurance, and unconditional friendship are core themes of the film. Corruption, manipulation, and betrayal are also present, but they're shown to fail in the end. The problem of "institutionalization" is shown and discussed -- a prison inmate has spent so much time in prison, he has forgotten how to live outside the prison walls.

A man is shown sitting in his car drinking whiskey from a flask before stumbling out to, presumably, murder his wife and her lover. Cigarette smoking. Inmates drink beer after Andy wins a bet with the captain of the prison guards.