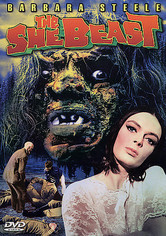 1966 NR 1h 22m DVD
When an accident forces a young couple's car into a lake, the wife (Barbara Steele) emerges possessed by the evil spirit of a vampire witch executed in the water centuries ago. As the bloodthirsty monster exacts her revenge with a murderous rampage, the husband's (Ian Ogilvy) only hope to reclaim his wife's soul is an exorcism. John Karlsen also stars in the 1960s horror film directed by Michael Reeves.