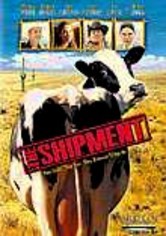 2002 R 1h 32m DVD
You've seen movies about a crazy guy who steals money from the mob … but have you ever seen a movie where a case of viagra is stolen from the mob? A New York mobster goes to "hicksville" looking for his stolen viagra, but he's constantly outwitted by a motley crew of farmhands and the town sheriff (played by Matthew Modine). And for an added comedic twist, it turns out the mobster's wife, Candy, is the sheriff's ex-girlfriend!