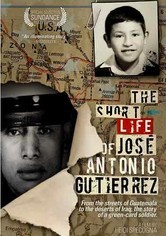 2006 NR 1h 29m DVD
Nominated for a Grand Jury Prize at the Sundance Film Festival, this 2006 documentary profiles the life of Marine Lance Cpl. José Antonio Gutierrez -- a "green card" (non-U.S. citizen) soldier and the Iraq War's first American casualty. A former street kid from Guatemala, Gutierrez traveled to America in search of a better life, only to end up on the other side of the world when he enlisted in the Marines to gain U.S. citizenship after serving.