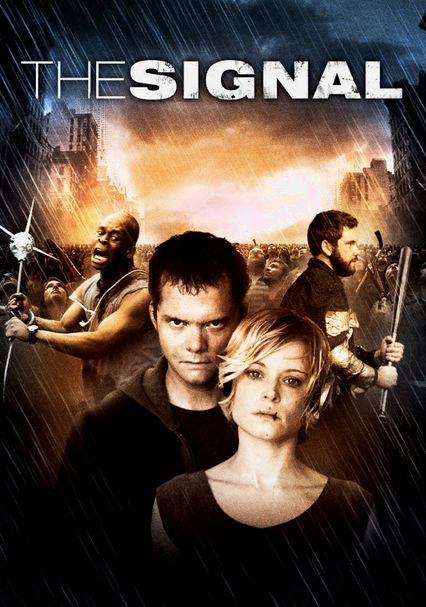 2006 R 1h 43m Blu-ray / DVD
A strange radio and television signal being broadcast in the city of Terminus breeds jealousy and hate, turning sane people into murderous lunatics. An unfaithful wife seeks the safety of her lover, while her affected husband hunts for her.

Parents need to know that this bloody horror movie is absolutely not for kids. It's packed with gruesome violence, weapons (gun, knife, garden shears, vehicles, poison), and repeated physical assaults by "crazed" TV viewers. Bodies are visible in building hallways and streets, there's a bloody decapitation, killers stagger like zombies, and there's lots of screaming and fleeing. Since the film doesn't have a specific perspective and frequently shifts between hallucinatory images, it can be physically difficult to watch. An early scene shows a naked male bottom and a woman in her underwear. Language includes frequent uses of "f--k" and other profanity.

Early scenes show lovers in bed, post-sex; he stands, and you see his naked bottom; she gets up to dress, appearing in bra and panties. Brief kiss near film's end. Occasional disturbing sexual language (e.g., "I'm just gonna grab a slut and pee in her butt," "She can feel my corn," "p---y," "boobs," "boner," "I made out with the dog for New Year's").

Lots (cast list includes many "random bodies"). Image on a TV shows exploitation/slasher movie (women tied and tortured by man with hatchet, blood everywhere). First sign of trouble is a bloody man in the street, moaning in pain. Characters afflicted with a virus-like "signal" kill and assault others continually, using a car, a bat, garden shears, a knife, a gun, a shovel, bug spray, a hatchet, a chainsaw, a golf club, and a hammer. Woman slips on pooled blood in a hallway, bloody man is duct-taped to chair, bloody bodies appear strewn in the street, a man appears on fire, a man is decapitated (bloody head rolls on the floor).

Infected characters are enraged and brutal; victims are mostly unable to fight back; no heroes.

Some drinking at a New Year's gathering. Occasional cigarette smoking.