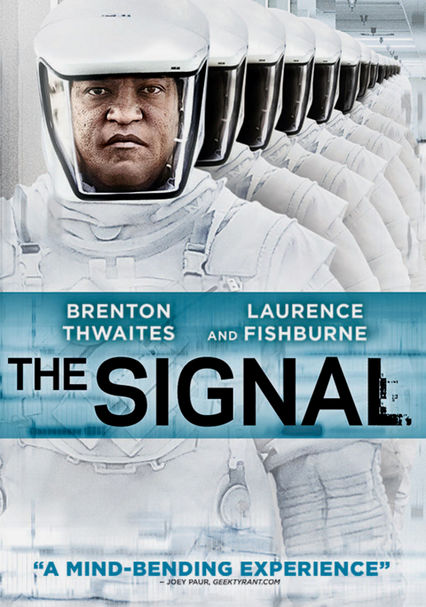 2014 PG-13 1h 37m Blu-ray / DVD
During their drive across the country, college pals Nick and Jonah -- accompanied by Nick's girlfriend -- run into major trouble in the Nevada desert. Duped into a setup by an evil-minded hacker, the trio soon become the demented techie's prisoners.

Parents need to know that The Signal is a low-budget sci-fi movie involving three college-age teens. It has a few twists that are better not discussed, though younger viewers who've seen fewer sci-fi movies will be more surprised than veteran viewers; suffice it to say that there are definitely some "jump shock" moments. There's a little blood, mostly in a scene in which a minor character is shot; bloody wounds are also shown, and there's some fantasy-style fighting and chasing. Two of the characters are a couple, and they're shown kissing (there's also a close-up of the girl's underwear-clad behind). Expect some strong language, including a few uses of "s--t" and "a--hole."

Two college-age characters are a couple. They kiss and behave comfortably around each other, but not much more. The girl's underwear-clad behind is shown in close-up.

Blood is seen during the climactic showdown. Characters have bloody faces, and there are blood spurts from shootings. A minor character is shown with a rifle and is shot. Characters are briefly seen cleaning rooms that have unknown brown/red stuff splattered on the walls. There's a fight around a big rig truck, and a character is bashed with the door. Characters are mysteriously thrown into the air. There are some jump-scare moments and some shocks. A truck crashes, and there's an explosion.

Perhaps the most important message here is "curiosity killed the cat." Also, if you're a computer hacker, don't underestimate anyone else's ability.