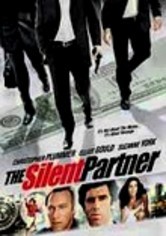 1978 R 1h 43m DVD
After discovering a secret plot to rob the bank at which he works, timid teller Miles Cullen (Elliott Gould) cunningly hides a large portion of the cash in his own safe-deposit box in this tense thriller. After the robbery, master criminal Harry Reikle (Christopher Plummer) discovers that he's been duped and puts the squeeze on Cullen to hand over the money. Oscar winner Curtis Hanson penned the screenplay.