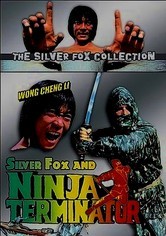 2005 NR 2h 0m DVD
It's action on the master echelon as Wong Cheng Li portrays the leader of the Silver Fox Gang in this high-flying martial-arts film. With his crew locked in a struggle against two other families for gangland dominance, one and all solicit help from ninjas. As the gangs and the ninjas square off in a battle royal, Hwang lets his fists and feet prove why he's called the Silver Fox. Richard Harrison and Bruce Stallion costar.