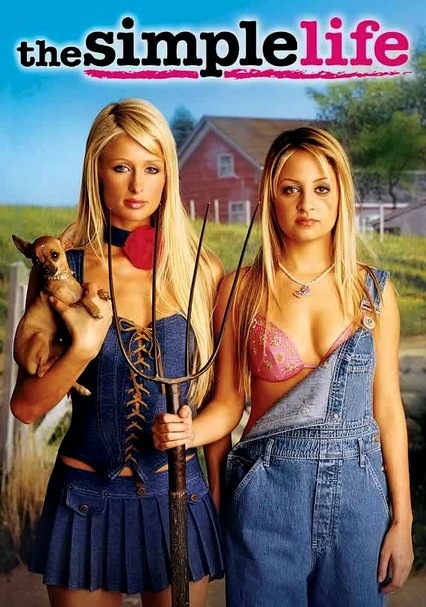 2003 TV-PG 5 seasons
Young, lovely and sheltered socialites Paris Hilton and Nicole Richie head out into the world to experience actual manual labor, proving willing but mostly incompetent in this reality series that ran for five eye-rolling seasons. The show focuses humorously on the yawning cultural gap between the city girls and the less sophisticated residents of the heartland, and the duo's sad attempts at driving cattle or flipping burgers in a fast-food diner.

They're the self-obsessed blondes with no ambition. Hotel chain heiress Paris Hilton and Nicole Richie (daughter of singer Lionel Richie) "rough it" on an Arkansas farm, a world away from any place that'll accept their charge cards. How do these fun-loving fish out of water fare in the down-and-dirty rural reality that many Americans call home? Hilariously! We just hope they don't break a nail!

Paris Hilton and Nicole Ritchie take to the open road in the second season of "The Simple Life." The glam girls pack up their pink truck and Airstream trailer and head out on the highway, shaking up every small town they visit. After a horse-riding accident, Paris is rushed to a hospital in the very first episode of Season 2. The girls also work as maids at a nudist colony, trap crawfish, give makeovers at a beauty salon and drive cattle.

The dynamic duo of Paris Hilton and Nicole Ritchie plays the fish-out-of-water card once again in yet another hilarious season of "The Simple Life." This time, they're working -- but not too hard -- as interns, trying their hands at jobs on Wall Street and elsewhere. They'll hop from one Greyhound bus to the next as they make their way down the East Coast in search of -- what else? -- their next "hot" adventure.

Despite their much publicized rift in the tabloids, hardworking hotel heiress Paris Hilton and celebrity spawn turned singer Nicole Richie reteam for a fourth season of the popular reality television show. Assigned to tasks with a pointedly matrimonial theme, the girls take turns playing wife and running a bustling household, which includes cooking, cleaning and strapping on 35-pound pregnancy suits.

Rise and shine, campers! Roughing it -- or at least trying to -- is the name of the game in the fifth season of "The Simple Life," with Paris Hilton and her on-again, off-again gal pal Nicole Richie shaping young minds as Camp Shawnee counselors. After patching their precarious friendship, Paris and Nicole head into the woods to preside over five separate mini camps: Couple's Camp, Theater Camp, Pageant Camp, Survival Camp and Fitness Camp.