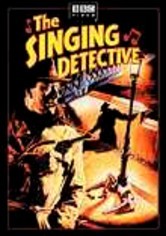 1986 NR 2 discs
Mystery writer Philip E. Marlow (Michael Gambon) is suffering a debilitating bout of arthritis in a British hospital. Unable to move without pain, he escapes into his imagination, plotting out a murder tale in which he's both a big-band singer and a super-sleuth. Mix in flashbacks of Marlow's youth and his unhappy marriage, and you have a gripping murder mystery and a lavish musical rolled into one.