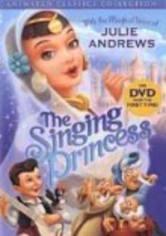 1967 NR 1h 6m DVD
Beloved actress and singer Julie Andrews lends her voice to this animated tale based on the classic children's tales of the Arabian Nights. A Grand Prize winner at the International Children's Film Festival, the charming feature weaves a story about a beautiful princess, an evil sultan, a hero of modest means and a magic lamp. Anton Gina Domeghini directs the Italian film, which features a score by Ricardo Pick Mangiagalli.