The Sins of the Children 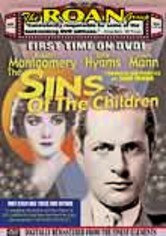 The Sins of the Children

1930 NR 1h 27m DVD
Although Adolf Wagenkampf (Louis Mann) is on the verge of closing an important business deal, he drops everything and moves to the desert to help his ailing son Ludwig (Francis X. Bushman) in this tender drama. Adolf's partner (Robert McWade) considers him a fool for sacrificing such a lucrative opportunity, but the unselfish Adolf ultimately proves to be rich where it counts. Robert Montgomery appears in one of his earliest screen roles.