The Sixth Side of the Pentagon / The Embassy 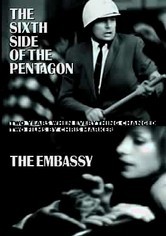 The Sixth Side of the Pentagon / The Embassy

1967 NR 0h 47m DVD
With the first half of this double feature, cinema pioneer Chris Marker collaborates with filmmaker Francois Reichenbach to document the 1967 Mobilization to End the War in Vietnam protest in Washington, D.C. Then, in "The Embassy," a reel of found footage chronicles the experience of a group of students, politicians and leftist activists who have taken refuge in an unidentified embassy in the wake of fascist military coup.