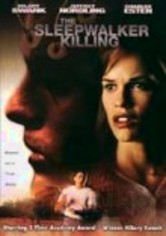 1997 PG-13 1h 37m DVD
After murdering his mother-in-law and seriously wounding his father-in-law, Mark Schall (Jeffrey Nordling) turns himself in. Although Mark admits to being guilty, he can't remember actually committing the heinous crimes. In his defense, a team of lawyers attempts to prove that while Mark did in fact murder his in-laws, he was asleep when it happened. Future Oscar-winner Hilary Swank co-stars in an early role.