The Son of Tarzan 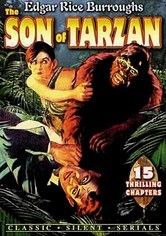 The Son of Tarzan

1920 NR 4h 1m DVD
Years after returning to his English homeland, Lord Greystoke (P. Dempsey Tabler) -- also known as Tarzan -- heads back to the jungle when his son Korak (Kamuela C. Searle) is kidnapped by the villainous Ivan Paulovich (Eugene Burr) and transported to Africa. Based on the novel by Tarzan creator Edgar Rice Burroughs, this silent film adventure also stars Karla Schramm as the King of the Jungle's fetching wife, Jane.