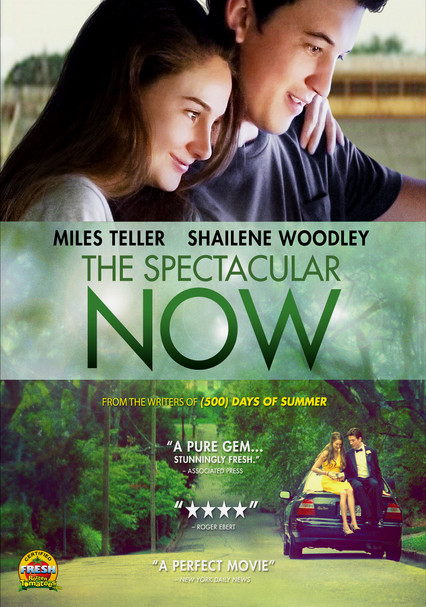 2013 R 1h 39m Blu-ray / DVD
When high school loner Aimee Finecky finds her classmate Sutter Keely passed-out drunk on a lawn, it marks the start of an unlikely friendship. After deciding to help Aimee raise her social confidence, Sutter finds himself falling for his creation.

Parents need to know that The Spectacular Now is a coming-of-age story adapted from author Tim Tharp's young adult novel about a hard-partying high school senior whose personal motto is to "live in the now." Although the movie is based on a YA book and is about high schoolers, it features constant underage alcohol consumption (the main character is an alcoholic), strong language ("f--k," "s--t," and more) and a couple of realistic sex scenes (one of which shows a glimpse of breast). Still, despite the mature content, the movie -- like the book -- will make teens think and offers an opportunity for parents and teens to talk about the problems with always living for the moment, the consequences of drinking/partying, and the risks of blowing off school, work, and other responsibilities to do your own thing.

Sutter makes it clear from the beginning that he and his ex were sexually active (a brief, non-graphic shot shows them having sex on a bed). Sutter and Aimee's first time together is a fairly lengthy scene, with Aimee's breasts briefly visible (she's topless, but her hair is so long that it covers most of her). Sutter and his best friend discuss how far they've gone after a date.

The movie isn't violent, but after drinking and driving, Sutter nearly gets in an accident on the highway and pulls over, which leads to another character getting hit by a car.

Even though Sutter is drunk a lot of the time, he does spout some thought-provoking ideas, like "embrace the weird" or "live in the now." He supports and encourages everyone around him, even his ex-girlfriend's new boyfriend, to see the best in/stand up for themselves. The movie shows how blurry the line between loving someone and enabling them is, and it will make teens think about the downside of partying too much.

The teen main character is hardly ever sober and walks around constantly with a big cup of soda that he mixes with gin or vodka. He has a flask that he uses to spike his drinks, and, at a party, he easily downs cup after cup of beer. Hard liquor, shots, beer -- he drinks it all. He's clearly an alcoholic, and he helps convince a non-drinking girl to drink heavily like him. Teens also smoke cigarettes and are served alcohol by adults -- in the main character's case, even by his own estranged (and equally hard-drinking) father.