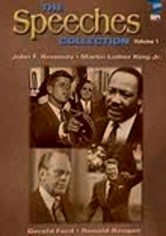 2002 NR 2 discs
This collection features stirring oratory from some of the 20th century's most gifted American speech makers, including highlights spanning the public careers of Ronald Reagan, Gerald Ford, John F. Kennedy and Martin Luther King Jr. In an age dominated by a rhetoric of convenience and nightly news sound bites, this anthology proves that few things have the power to inspire as a substantive speech delivered by a gifted orator.