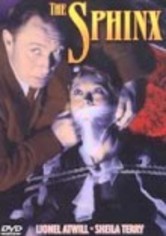 1933 NR 1h 3m DVD
After a jury acquits wealthy mute philanthropist Jerome Breen (Lionel Atwill) on charges of murdering a janitor, reporter Jack Burton (Theodore Newton) grows skeptical of Breen's "muteness" when another string of killings occurs. But Burton's would-be girlfriend, Jerry Crane (Sheila Terry), the paper's society editor, believes in Breen's innocence and she cozies up to the millionaire, not knowing she may be walking into a very dangerous trap.