The Spirit of Diana 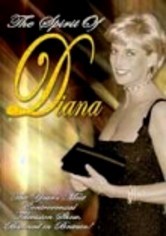 The Spirit of Diana

2004 NR 1h 30m DVD
Produced for British television and subsequently banned from it, this controversial documentary witnesses a group of psychics converging on both St. Paul's Cathedral and in the Paris tunnel where Princess Diana was killed in 1997, in an attempt to contact Diana's spirit. Does she have any messages to convey? Who did she really love? Was her death truly an accident? Also includes interviews with Mohammed Al Fayed, Andrew Morton and more.