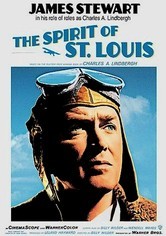 1957 NR 2h 15m DVD
Air travel became limitless when Charles A. Lindbergh (James Stewart) flew the pioneer route from New York to Paris on May 21, 1927. From his dubious airborne mail runs to the conception and creation of a trans-Atlantic aircraft, the ambitions of Lucky Lindy paved the sky for aviation advancement. Academy Award-winning director Billy Wilder pilots this soaring adventure through the trials and tribulations of an iconic American hero.