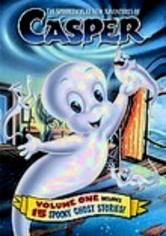 2007 NR 1h 47m DVD
Casper the Friendly Ghost returns in this Fox animated series inspired by the 1995 feature film. Now in charge of his three unpredictable uncles Stretch, Stinkie and Fatso, Casper's at his wit's end. With the help of Dr. Harvey (voiced by Dan Castellaneta), a therapist who specializes in ghost problems, and the doctor's teenage daughter Kat, Casper tries to put an end to the ghostly trio's mischief.