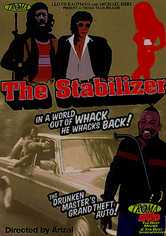 1984 NR 1h 39m DVD
Peter O'Brian stars as Special Agent Peter Goldson -- the Stabilizer -- in this action-packed thriller produced in Indonesia. The FBI is hot on the trail of drug smuggler Greg Rainmaker (Craig Gavin), who has killed Goldson's fiancée and kidnapped a famous professor who's developed an effective drug detector. The Stabilizer teams up with his daughter (Dana Christina) to save the professor and bring Rainmaker down for good.