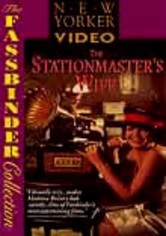 1977 NR 1h 51m DVD
Originally produced as part of a three-hour drama for German television, this edited-down narrative focuses on the relationship of a weak-willed railroad stationmaster (Kurt Raab) and his promiscuous wife (Elisabeth Trissenaar) who wears the pants -- and finds passion with the town butcher. As the stationmaster holds court with members of the local Nazi party, his wife's antics breed gossip that he refuses to believe.