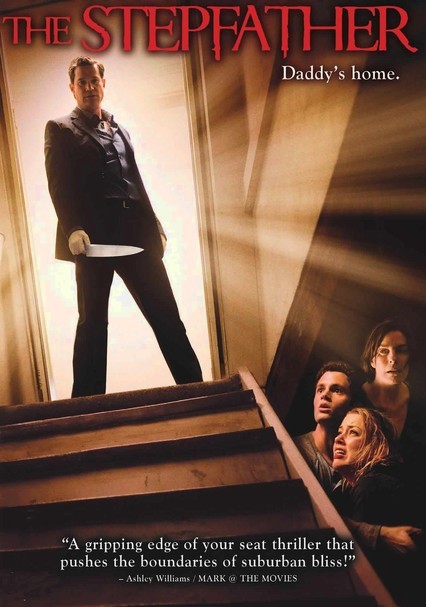 2009 UR 1h 42m Blu-ray / DVD
In this spine-tingling remake of the 1987 thriller, a series of mysterious events leads teenager Michael Harding to suspect that his mother's new boyfriend may be a dangerous serial killer known for preying on families.

Parents need to know that this thriller/horror remake of 1987's The Stepfather has plenty of tension, scares, and violence, though most of it is relatively bloodless. Three murders take place on screen (as well as fighting, attacks, etc.), and several other dead bodies are shown. Characters talk a lot about how families move on after divorce and loss, and there's some sensuality (a lot of kissing and skimpy swimsuits), underage drinking, and salty language. A supporting character is in a committed same-sex relationship. Also, this review is for the rated, theatrical version. There are unrated versions available.

Some swimsuit-clad kissing and sounds of hanky-panky being initiated (implied sex). Plenty of skimpy outfits; one female character spends the majority of the film in swimwear.

Three bloodless murders take place on screen (the victims are thrown down stairs, suffocate, and drown). Several dead bodies, including three children, are seen in a killer's wake. Also beatings, fighting, chases, a knife attack, falls, and a stabbing with a shard of mirror to the neck, with some blood.

Some strong language, including "goddamn," "damn," "screwing," "ass," and the finger being given.

You could argue that the movie has a message about family sticking together, but any real positive content is lost amid the violence and tension.

Characters drink beer, wine, and hard liquor. An older man offers a minor two shots of tequila in an attempt to bond. A sleeping pill is taken.