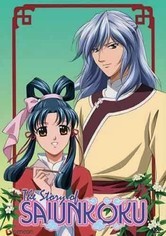 2006 NR 3 discs
Shurei, a young woman whose family has noble blood but little money, is thrilled to receive an invitation to serve as consort and advisor to the emperor of Saiunkoku, but soon discovers that life in the palace is more complicated than she expected. After some initial hazing, Shurei begins to win the respect of the other court officials in this popular anime series, until questions arise about her loyalties and her personal politics.