The Story of Yosemite 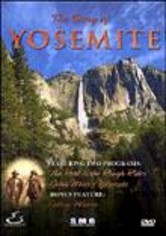 The Story of Yosemite

1999 NR 0h 50m DVD
The stunning scenery of Yosemite stars in three features exploring the beauty and history of this national treasure. "The Poet and the Rough Rider" recreates the historic meeting of Sierra Club founder John Muir and former President Theodore Roosevelt. "John Muir's Yosemite" interlaces picturesque shots of Yosemite with readings of Muir's work. In "Falling Waters," striking images of the park are accompanied by a charming musical score.