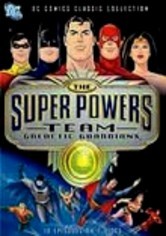 1985 NR 2 discs
The final lineup of Hanna-Barbera's hit team of superheros -- which includes Superman, Batman, Aquaman, Green Lantern, Wonder Woman and the Flash -- fights evil from their Metropolis Hall of Justice headquarters in this animated series. Facing a slew of sneaky scoundrels such as Darkseid, the Joker, Lex Luthor, the Penguin, Scarecrow, Bizarro and Brainiac, the Superfriends combine their special powers to protect the earth's citizens.