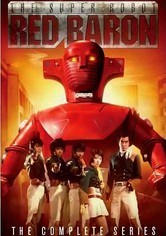 1973 NR 6 discs
After a despot dispatches his evil minions to kidnap the world's largest robots for nefarious purposes, Earth's safety lies in the hands of scientist Kurenai Kenichiro, who uses his gigantic robotic creation, the Red Baron, to fight back. But when Kenichiro is abducted and forced to disclose the Red Baron's whereabouts, it's up to Kenichiro's younger brother to save his sibling and the rest of the planet in this Japanese sci-fi series.