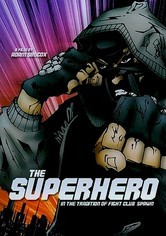 2007 NR 1h 20m DVD
A unique mix of live action and animation, this comic book-style fantasy thriller unfolds on the rough-and-tumble streets of Manchester, England, where a gang of drug-addicted thugs led by the infamous Needler is terrorizing the citizenry. Neither the people nor the police can seem to stop this reign of brutality -- their only hope might be a masked vigilante with a flair for violence who demands justice at any cost.