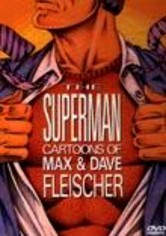 1941 NR 1h 40m DVD
Man of Steel fans will savor this collection that rounds up 17 original Fleischer brothers animated shorts -- many of them unseen for generations -- that were shown in movie theaters during the early 1940s. Enlisted by Paramount to bring the comic-book hero to the big screen, the Fleischers produced each 'toon at a cost of more than $100,000 apiece. Also included is the 1944 Warner Bros. wartime spoof "Snafuperman."