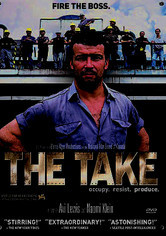 2004 NR 1h 27m DVD
Following Argentina's economic collapse in 2001, 30 unemployed auto-parts factory workers marched into an idle Buenos Aires plant and refused to leave. This simple protest -- the take -- ultimately pitted the workers against their bosses, the banks and the Goliath of corporate globalization. Journalist and social activist Avi Lewis's documentary chronicles the workers' passionate mission to reopen the plant -- and restore their lost dignity.