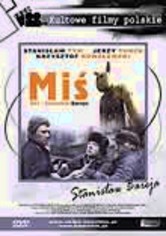 1981 NR 1h 51m DVD
Stanislaw Bareja's cult hit from the 1970s continues to endure as one of Poland's beloved films. En route to London, Bear (Bronis aw Pawlik) discovers at the border checkpoint that his passport is missing a few pages, which may prevent him from traveling to the city with the sports team he manages. Could it be that Bear's cheating wife (Barbara Burska) is the culprit? And is she about to loot their bank account in England?