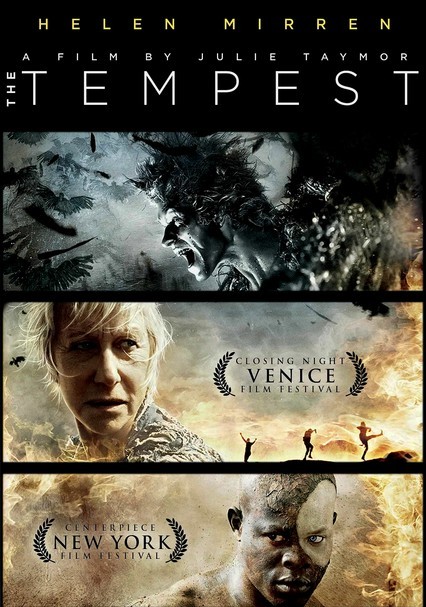 Parents need to know that this sometimes-scary adaptation of one of Shakespeare's final plays is all about revenge. The central character, Prospero, has been changed to a woman (Prospera); she's powerful, though not exactly a positive role model, given that she's the one consumed by vengeance. Two of the male characters are seen in skimpy costumes and/or semi-nude, and there are some frightening fantasy images and threats of violence. One character is portrayed as a comical drunk who uses alcohol to influence another character's will. Teens who enjoy Shakespeare may find it an accessible adaptation, but kids who aren't fans of the Bard likely won't be interested.

Prince Ferdinand and Miranda declare their love for each other and are seen kissing. Ariel and Caliban are seen wearing very little clothing. Caliban wears a loincloth, and Ariel's naked buttocks are on view from time to time.

No real fighting, but there are threats and shouting. Sebastian and Antonio draw their swords in an attempt to kill their king while he sleeps. There are also some frightening images when Ariel appears as a "black angel of death" and as Prospera conjures up some of her black magic.

One use of "damned."

The main thrust of The Tempest is revenge, as Prospera tries to get even with those who wronged her years before. She plays cruel tricks on her visitors and eventually gets everything she wants. Most of the characters behave selfishly and squabble amongst themselves. There are no consequences for any of this behavior. Prince Ferdinand and Miranda are the only ones who rise above this, coming across as both naïve and redeemed by true love.

Stephano turns up stumbling drunk, carrying a bottle of booze. He shares it with Trinculo and then gives some to the monster, Caliban. Caliban has never tasted alcohol before, and he becomes instantly enchanted and overcome by it; he pledges his servitude to Stephano in exchange for more.