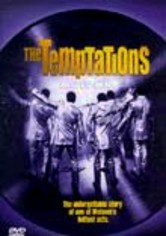 1998 NR 2h 54m DVD
Told chiefly through the viewpoint of founding member Otis Williams (Charles Malik Whitfield), this biographical miniseries -- based on the book by Williams and Shelly Berger -- chronicles one of Motown's most influential singing groups. But success, it seems, never comes without temptation as Williams and company wrestle with cocaine addition, booze, depression, envy and ballooning egos that threaten to destroy their hard-earned fame and fortune.