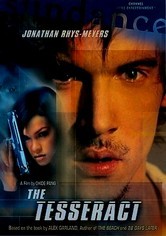 2003 R 1h 37m DVD
The pasts and futures of four strangers -- a despondent psychologist, a drug runner, a female assassin and a mob boss -- collide in a series of intersecting plotlines as the disparate quartet converges on a tumbledown hotel in Bangkok, Thailand. Director Oxide Pang Chun hurtles the characters into a dizzying succession of shifting time lines in this taut psychological thriller starring Jonathan Rhys-Meyers and Saskia Reeves.